The 2022 generation of the XMG PRO 15 and PRO 17 moves away from the thin-and-light approach of last year’s models and positions itself as a performance-focused, balanced full package. The gaming workstation’s configuration options include Intel processors from the 12th Core generation, Nvidia graphics cards from the RTX 3080 Ti to the 3060, and 4K, WQHD and Full HD displays. With the new XMG FUSION 15, one of the most successful XMG laptops of all times, receives an upgrade – and enters the race with a Core i7-11800H as well as RTX 3070 and 3060.

Additional optimisation of the cooling system is gained through the use of liquid metal pads on the core components. In contrast to conventional heat conductors, these are characterised by particularly high long-term durability.

XMG markets the 15.6 and 17.3 inch laptops as gaming workstations. Both the configurable display options with high colour space coverage and their connectivity features are duly versatile. Whilst the PRO 15 is available with a 144 Hz fast Full HD IPS panel, a WQHD IPS panel at 165 Hz and a UHD OLED panel, the PRO 17 offers a choice between a 165 Hz fast WQHD IPS and a UHD IPS panel. Both 4K displays feature factory X-Rite colour calibration.

The hybrid concept of gaming laptop and creative workstation is also reflected in the abundant connectivity: Thunderbolt 4, a DisplayPort-capable USB-C 3.2 port, HDMI 2.1 and Mini DisplayPort 1.4 can run up to four external monitors. The Thunderbolt 4 port is linked to Intel’s efficient iGPU, whilst all other graphics interfaces are connected to the dedicated Nvidia graphics card and thus support G-Sync and VR headsets. In addition, there are two USB A 3.2 ports, a microSD card reader, Gigabit LAN and Wi-Fi 6, a full HD webcam with temporal noise reduction, a headset-compatible headphone output and a microphone input with S/PDIF support. The keyboard offers a full numeric keypad, separate navigation and arrow keys and RGB per-key illumination.

The XMG FUSION 15, which was presented for the first time at IFA 2019 in Berlin and developed in cooperation with Intel, is also receiving an update after an unusually long product life cycle of just over 2 years. The dimensions of the magnesium chassis of the M22 version have increased slightly to 35.6 x 23.4 x 2.17 cm, while the weight has remained almost unchanged at 1.94 kg.

The graphics cards available are the GeForce RTX 3070 and 3060, with a TGP of 125 and 120 watts respectively. In benchmark mode, which can be activated via the Control Center, a further 20 (RTX 3070) or 10 watts (RTX 3060) are available, but these settings automatically activate maximum fan speed. On the CPU side, the laptop does not rely on Intel’s hybrid design of the 12th Core generation, but rather integrates an alternative with 8 fully-fledged cores and 16 threads with the Core i7-11800H.

The cooling system of the FUSION 15 has also been further improved. For example, larger fans are now used which are characterised by quieter operation and a lower frequency acoustic profile. At the forefront of the strengths of the laptop is the balanced, medium performance profile in silent fan mode: thanks to the flat fan curve, the FUSION 15 delivers just 10 percent less performance than in the maximum profile, yet remains very quiet under gaming load with 42 instead of 53 dB(A).

Instead of the previous Full HD display, XMG has selected a 165 Hz IPS panel with WQHD resolution and 95 percent sRGB colour space coverage. The screen can be folded out flat with an opening angle of up to 180 degrees. The memory configuration includes two SO-DIMM slots for up to 64 GB DDR4-3200 RAM and a maximum of two M.2 SSDs, with the primary drive connected via PCI Express 4.0.

The optomechanical keyboard with tactile silent switches, N-key rollover and RGB single-key illumination as well as the 93 Wh battery have been adopted from the preceding model. However, the battery now has an integrated chip for charge control which, in combination with the option of manually limiting the charge capacity, results in improved longevity. Connectivity features include 2.5 Gigabit LAN and Wi-Fi 6, three USB-A 3.2 ports, Thunderbolt 4 with integrated USB-C 4.0 and DisplayPort function, HDMI 2.1, a full-size SD card reader and a 2-in-1 audio port. 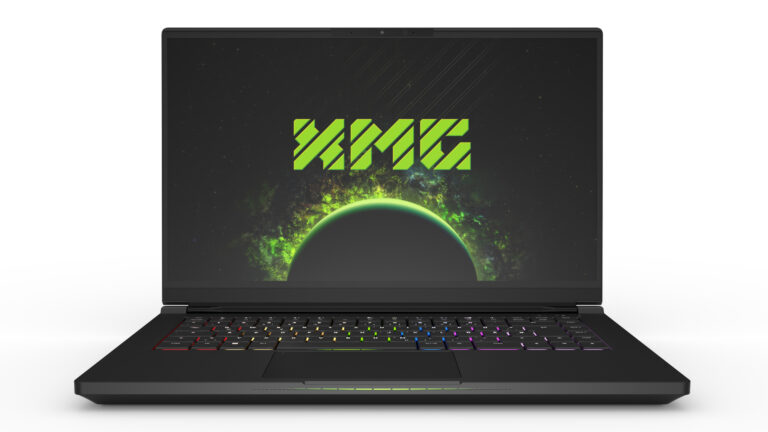